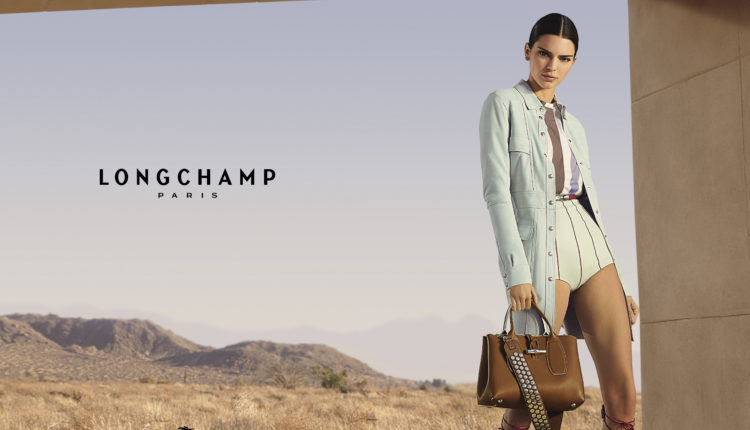 The Californian desert provides a dramatic backdrop for Longchamp’s Summer 2020 advertising campaign featuring US supermodel Kendall Jenner. More even than the landscape, however, it is the light that stands out in these images, photographed by Columbine Goldsmith and styled by Marie-Amélie Sauvé, which echo the theme of the Longchamp Summer 2020 collection – the solar journey from dawn to dusk.

The lead visual captures Kendall Jenner in the intense light of the midday sun. The deep blue of the sky and the sandy beige of the rocks create a dazzling colour-block effect with the model’s graphic red leather mini-dress, a standout look from last September’s New York fashion show. With its feel-good vibe, infused with warmth and energy, the image speaks to the vision of the modern Longchamp woman, while also recalling the House’s leather-goods heritage.

The visual also spotlights one of Longchamp’s most emblematic bags: the Roseau. A revolution when it was launched in the 1990s as an open tote secured with a bamboo toggle – the roseau of the name – it has been revisited this season in a mini edition with the toggle scaled up to contemporary, oversized proportions. This new shape is worn by Kendall in the on-trend way – short and across the body – while the model’s silver-tone ring and belt buckle also reprise the iconic bamboo motif.

Two further visuals were shot at the beginning and the end of the day. In the soft light of morning, Kendall wears a hooded dress in lightweight, pastel-pink nylon – a nod to the material of Longchamp’s iconic Le Pliage® – whose tie-waist and flirty hemline create a fresh, feminine mood, which is accentuated by a mini Roseau bag in black patent leather. A more sophisticated ambiance pervades the image shot during the evening’s golden hour. Kendall wears a leather coat in the palest celadon, as if bleached by the sun, and carries the new Roseau bag in luxe Barenia calfskin, which develops a beautiful patina over time, while a studded shoulder strap adds a modern touch.

The Longchamp Summer 2020 print campaign with Kendall Jenner will break worldwide from February 2020, while three short films featuring the campaign’s three variations on the Roseau bag will be aired on longchamp.com and social media.