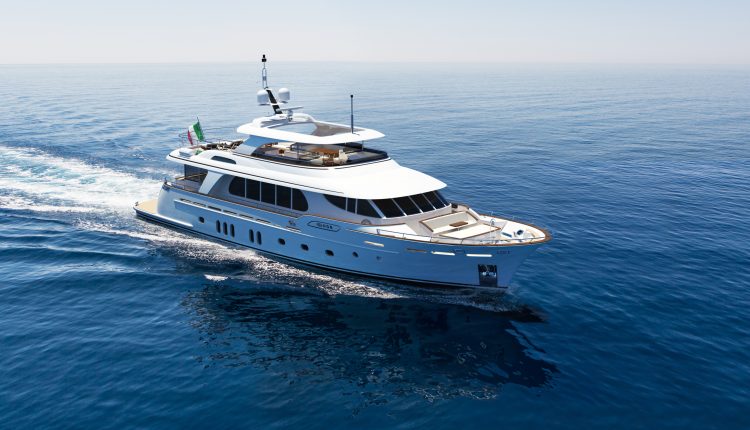 M/Y Vanadis, the first Made-in-Italy motor yacht to obtain the Lloyd’s Register’s “Hybrid Power” certification, will be presented as a world première in Cannes.

CCN will be taking part in the Cannes and Monaco boat shows proudly announcing a new important attainment, which sets a new course for the Italian boat builder, based in Marina di Carrara. The shipyard is indeed going to introduce a world première at the Cannes Yachting Festival, to be held from 10 to 15 September: MY Vanadis, the fourth yacht in CCN’s Fuoriserie family, recently delivered to her Owner – a 31 m fully-custom aluminum yacht that stands out for her harmonious architecture, her classical, timeless outer lines and cutting-edge technological solutions, as well as featuring a great focus on environmental friendliness and efficiency. After the Yachting Festival, MY Vanadis will cruise on to reach the Monaco Yacht Show, where she will be on display from 25 to 28 September. MY Vanadis is the first Made-in -Italy motor yacht to obtain the Lloyd’s Register’s “Hybrid Power” certification – a breakthrough resulting from a close cooperation between LR, CCN and Siemens. The latter is the supplier of the power management system and the batteries, which will allow the yacht to cruise in diesel, diesel-electric or full electric mode, ensuring unparalleled comfort and zero emissions. The yacht is equipped with 2 Schottel STP 150 FP twin-propeller azimuth thrusters driven by a hybrid system which includes both traditional diesel engines and an electric engine supplied by generators or batteries. This means low consumption and limited environmental impact as well as increased onboard comfort thanks to reduced noise and vibrations both at anchor and when cruising.

Two CAT C9.3 B engines can push the Vanadis to a maximum speed of 12.5 knots, which decrease to 8 knots when cruising in electric mode. The craft is fitted with a set of AKASOL lithium-ion batteries (175 kWh) supplying most onboard utilities and allowing to remain at anchor at zero emissions for up to 17 consecutive hours and to cruise at limited speed for up to 120 minutes, depending on the power load.

CCN, which, together with the Baglietto and Bertram brands, has been part of the Gavio Group since 2011, specializes in the construction of high-performing steel and aluminum light alloy and composite material yachts ranging between 24 and 50 meters in length. The traditional fiberglass ‘Flyingsport’ line was recently joined by the ‘Firma’ collection of crafts built by CCN in cooperation with leading designers and naval architects. Among the latest projects in this collection are the 30 and 35-meter steel and aluminum “small megayachts”, penciled by Tommaso Spadolini, and the DOM123, designed by Stefano Vafiadis and currently under construction at the Shipyard. With the “Fuoriserie” line, the product range that CCN is offering the market has extended further, resulting in a very complete series of highly diversified and fully-custom vessels coming in different materials, once more confirming the Carrara-based boat builder’s increasing focus on the provision of tailored services capable of meeting each and every customer’s needs and expectations.