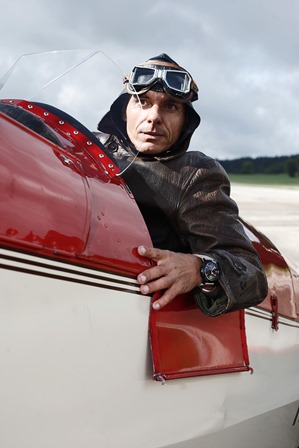 The Chronofighter is the quintessential stopwatch series. Back in the forties, during the allied bomber raids, pilots needed to know how many seconds flight they were past a certain landmark. High up, very cold, being shot at and of course wearing gloves, they needed a specially designed stopwatch.

The big, generously designed crown lever, a precision mechanical movement, the rugged construction and a big dial were vital elements for a watch designed for such a mission.
Pilots are not the only people for whom elapsed time is a critical element. Inspired by and dedicated to pursuits such as diving, racing and exploring, the Chronofighter series is Graham’s answer to split-second timing in extraordinary environments.

mercury pendulum to compensate the influence of temperature on pendulums, to name a few. He also built the master clock for Greenwich Royal Observatory which timed most of the 18th century and lots of science instruments for astronomers and physicists. GRAHAM was revived in 1995 and is today a privately owned Swiss watch company.