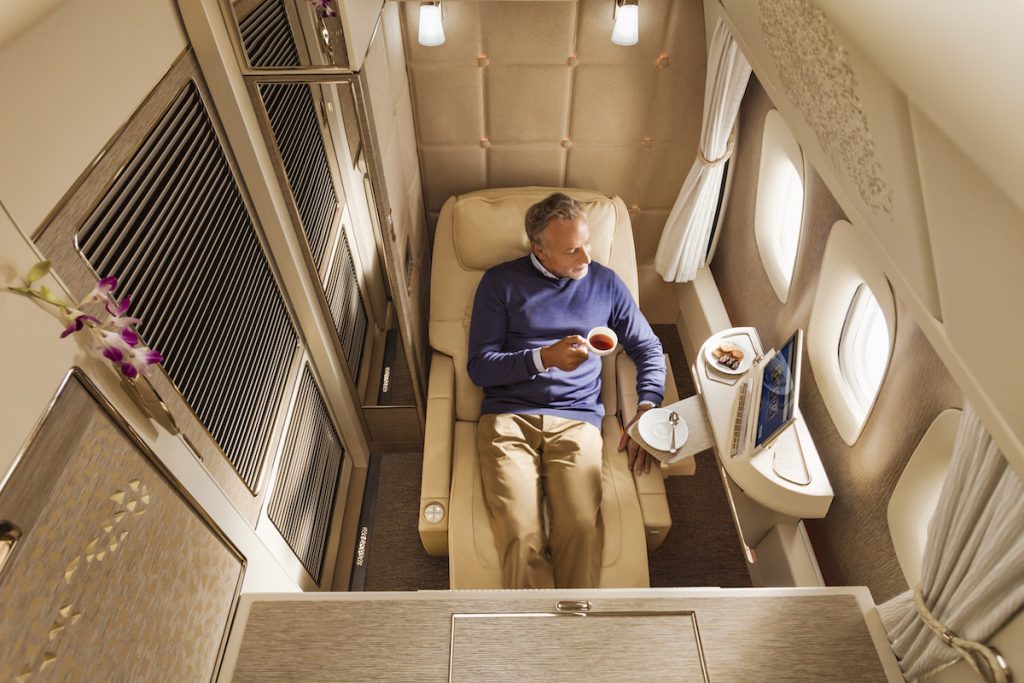 Even on some of the world’s biggest jets, personal space is the ultimate luxury.

That’s what Emirates is trying to sell with its latest first-class cabin, which feature floor-to-ceiling doors that give the suites a look more at home on a luxury train than on a commercial flight.

The airline, whose over-the-top first-class suites have been the backbone of its marketing campaigns for years, unveiled the new first class product at the Dubai air show on Sunday. Emirates said it was inspired by the Mercedes-Benz S-Class, a car the airline will use to chauffeur its first-class passengers to and from the Dubai airport.

Emirates pulled back the curtain on the new class just weeks after its competitor Singapore Airlines revealed its upgraded first-class suites. The two long-haul airlines are competing for well-heeled travelers by attempting to provide a private-jet experience on board some of their largest planes.

Meanwhile, other airlines are eschewing first-class altogether. They are favoring souped-up and denser business class- and premium economy-cabins, in an effort to get more paying passengers on board.

Here’s a look at the new first-class cabin, as well as what to expect from business and coach class — where passengers on board the 777 will sit 10 abreast. The new cabins take off on Dec. 1 from Dubai to Geneva and Brussels.

Of course, such luxury doesn’t come cheap. A flight search for a round-trip ticket from Geneva to Dubai in early January showed first-class prices around $9,000.

Private flight on a big plane

Suites are fully enclosed and offer floor-to-ceiling sliding doors, like cabins on some of the world’s most expensive train cabins — such as those aboard the Venice Simplon-Orient-Express.

The suites have up to 40 square feet of space. The airline claims passengers will have enough room to change their clothes, even after the lie-flat bed is set up.

The suites’ color palette includes cream, gray and gold, and aims to mimic the interior of a luxury car. It features a leather seat and mood lighting. The airline kept other services available in its current first-class suites, including a personal minibar.

Passengers in the center suites will have “virtual windows:” Screens that project the view of the sky outside. Those lucky enough to sit by a window are given binoculars.

Suites have a service window where passengers can be served drinks and appetizers without having to open the suite doors.

Passengers in the 10-abreast in economy section will have leather-adjustable headrests.