PIERRE AND CAROLE, A LOVE STORY 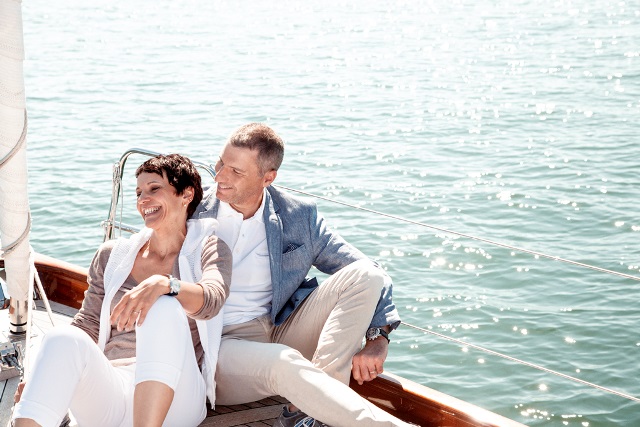 OUR STORY, OUR BRAND, OUR PASSION

In watchmaking as in love, the most beautiful stories are entwined with passion that endures through time. The secret? A subtle interaction between each element to allow the magic to weave its unique spell. While implacably mathematical when it comes to orchestrating tiny mechanical parts, this magic is mysterious and elusive when it comes to stirring the hearts of a man and a woman. For Carole and Pierre Dubois, founders and owners of Pierre DeRoche, everything began more than 30 years ago. When they first met they had the sense of having known each other forever, and have never been parted since.

Life has that funny way of delivering unexpected surprises. On paper, nothing predestined them for this amazing story. Carole was a laboratory assistant, while Pierre had been immersed since childhood in the science of time measurement. In the Dubois family firmly established in the Vallée de Joux, watchmaking is a heart-felt vocation passed on from father to son. Across four generations already, the Dubois-Dépraz family had been developing and producing horological complications for the great names in Swiss watchmaking. This love of fine mechanisms proved catching. Carole succumbed to the charms of a previously unknown world, to the point of sharing Pierre’s dream: to create a full-fledged watch brand. It would be their fourth child and the Pierre DeRoche adventure began in 2004.

A TECHNICAL AND DARING BRAND

The youthful brand was not short on creativity. Firstly, on a mechanical level, with complications that are unique in the world. The chronograph with three concentric hands on a single counter, as well as the fascinating ballet of the TNT Royal Retro orchestrated by six retrograde seconds hands are perfect examples. Carole and Pierre have indeed made moving off the beaten track their leitmotif. Their timepieces are unlike any others, brilliantly mingling aesthetic virtuosity, innovation and originality. Each watch stems from a perfect balance reflecting the chemistry between the couple.

The TNT Royal Retro Skull has always been unique in that it represents the world’s only watch equipped with six retrograde seconds mechanisms. Now, with its new skull-shaped central bridge, it is further pushing the boundaries of exclusivity. This bridge provides a playground of unlimited scope, since it can be personalised and shaped to form other motifs according to the wishes of its future owner. Whether rebellious or romantic, each of these motifs creates a seductive play on light and shade thanks to an innovative “light trapping” laser engraving motif that creates a distinctive engraving background which prevents light from escaping. The contrasts thus achieved accentuate the strength of this new TNT Royal Retro Skull available in two versions: one featuring a titanium and steel case set with 240 diamonds, and the other with an all-black DLC treatment.

TNT, the trailblazing model in the Pierre DeRoche collection, finds its place on traveller’s wrists this year with a GMT display combined with a power-reserve indicator. The iconic bodywork – a titanium and steel case – of this new 43 mm TNT model takes on board a deliberately classical touch by adopting an opaque dial – a first for a TNT! The particularly legible 24-hour dual-time display accentuates its sporting spirit through an original offset composition aligned with the power-reserve. This remarkably stylish new TNT carries only one pusher, since all the GMT operations are handled via the crown. It is available in two exclusive versions: one with a titanium and steel case framing an anthracite black dial, and the other with a black DLC-treated case and sand-toned dial and strap.