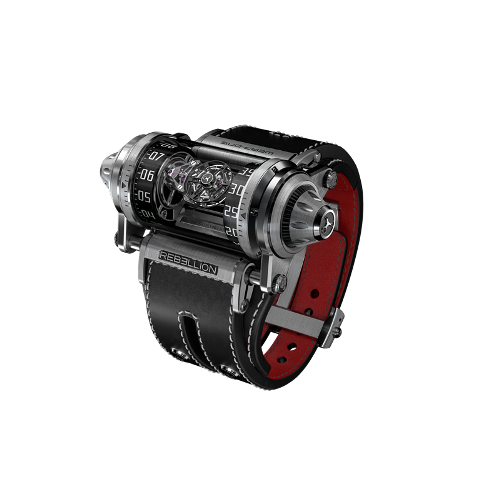 REBELLION Timepieces announces the launch of their newest series, the Predator 2.0.   The innovative series is an update to the original Predator and carries on the tradition of fusing racing technology and aesthetics into quality timepieces.

The Regulator Power Reserve has a legacy regulator design which seamlessly combines watchmaking history with car racing.  In the middle of the timepiece is the in-house movement based on a self-winding motor. Looking into the watch’s large, sapphire glass is like peering into a racecar.  The dashboard exhibits two sub-dials which display the hours and minutes while the newly developed REB-AMS bent hand rotates around the full display to mark the seconds.  It is completed by a special fuel gauge located at 6 o’clock, revealing how much of the 46-hour power reserve remains.

The Predator 2.0 Regulator Tourbillon is a 30-piece, limited edition watch.  It is named after its in-house movement, the P351 self-winding Regulator Tourbillon.  Located at 6 o’clock and encased in a 60-second rotating cage, the watch’s tourbillon offsets any disruption caused by the Earth’s gravity, providing the timepiece with superb accuracy.  The date is displayed through a window at 4 o’clock, while special sub-dials read the hour and minutes and the newly developed REB-AMS hand marks the seconds.  The Predator 2.0 Regulator Tourbillon boasts a significant 65 hours of power reserve, the largest power reserve of this series.

The Predator 2.0 GMT is a 25-piece, limited edition watch named for its distinctive 24-hour GMT time-zone indicator. Its large, sapphire case reveals the watch’s inner-workings.  The display is directly inspired by racecar brakes and its dashboard exhibits a unique hour hand comprised of a rotating disc and red caliper.  It is finished-off by the racing-inspired REB-AMS minute hand and has a power reserve of 42 hours.

The Weap-One and the Twenty-One.   The Weap-One is a unique piece inspired by race car suspension. It features a never-before-seen tourbillon movement with a non-stationary horizontal axis and is housed in a detachable, sapphire glass tube.  In contrast, the Twenty-One is a classic-car inspired piece which features a Rebellion’s first in-house GMT movement, a two-spoke steering-wheel design and a price tag set to target a new customer segment.

The new Weap-One (pronounced similar to weapon) features a never-before-seen, asymmetrical, 60-second flying tourbillon movement.  Suspended between the hour and minute rollers, the tourbillon is attached to two plates. Each plate rotates at a different speed, resulting in a non-stationary horizontal axis – the first of its kind. Designed by Fabrice Gonet and made in collaboration with Concepto, the movement is housed in a detachable sapphire crystal tube which offers maximum viewing and countless mounting options.

Integrated into the Weap-One are several pieces of racing technology. Like the wheels of a race car, the rollers and tourbillon-mounted plates rotate at varying speeds.  To compensate for this difference in speeds, the movement was developed with two differentials modeled after those found in race car suspensions.  Ten ball bearings have replaced jewels in this piece for additional reduction in rotational friction as well as radial and axil loads.

Two rollers read the time- hours on the left and minutes on the right.  The numbers and indexes are treated with Super-LumiNova® to ensure ease of readability day or night.  Finishing the piece is a dual crown system – mounted on either side of the movement and fashioned after wheel nuts – the left sets the time while the right winds the 60-hour power reserve.

REBELLION Timepieces is a Swiss watchmaker based in Lornay, Switzerland.  It was founded in 2008 by an industrialist passionate about watchmaking, high technology and car racing.  They are the only watch brand to have its own racing team, REBELLION Racing.  The expertise in technology and design garnered from the race team are integrated into every unique and complex timepiece.